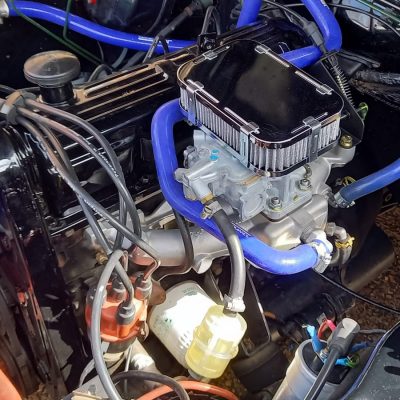 Behind the Scenes – Live Draw of the 1986 Ford Capri

Last night saw the draw of the latest Bridge Classic Cars Competitions prize, the 1986 Ford Capri Laser. But, to change things up we decided 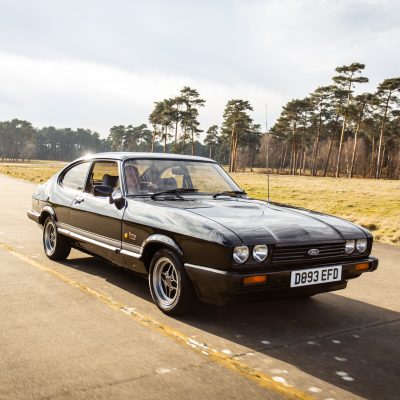 Behind The Scenes – Photoshoot with the 1986 Ford Capri

With the 1986 Ford Capri being completely checked over, inspected and worked on by the Bridge Classic Cars restoration workshop, it’s time to do this 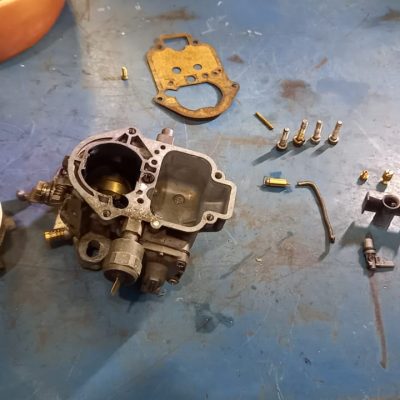 Stripped Back – Stripping the Carburettor of the 1986 Ford Capri

The restoration technicians at Bridge Classic Cars have stripped down the carburettor of the 1986 Ford Capri to get the classic Ford running just right. 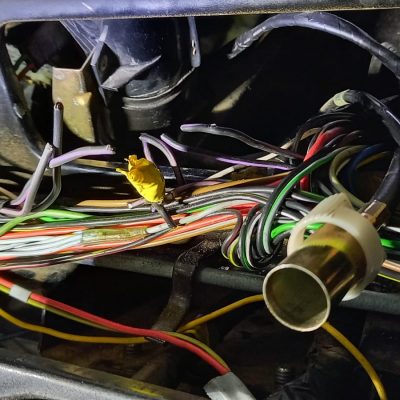 The team in the Bridge Classic Cars workshop have been working on the 1986 Ford Capri to get everything working exactly as it should. First, 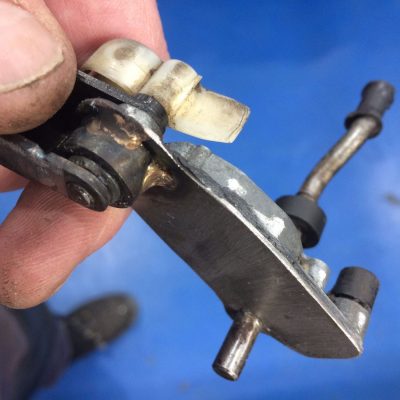 Our recent arrival, the 1986 Ford Capri, has been inspected by the workshop who noted the sunroof on the classic Ford wasn’t working correctly. So, 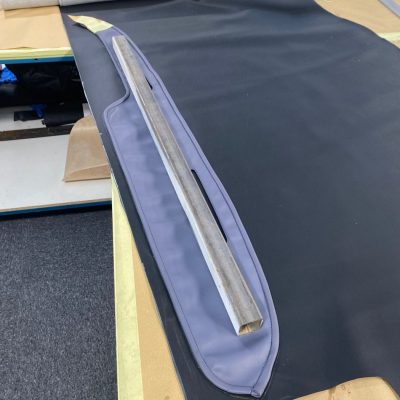 The 1986 Ford Carpi Laser in the Bridge Classic Cars workshop has got some pretty serious cracks in the original dashboard. Our in-house trim shop 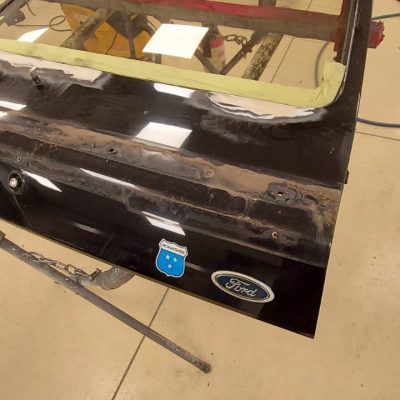 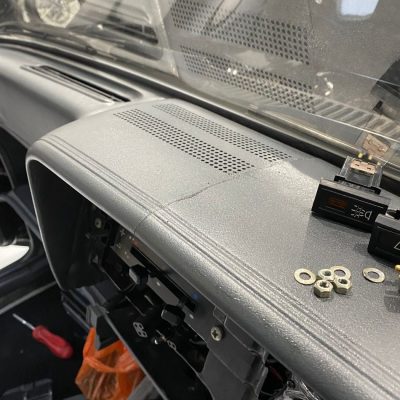 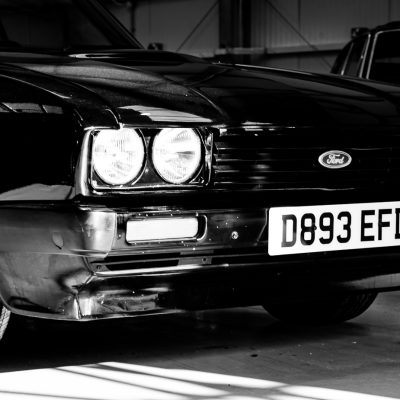 The latest arrival into the Bridge Classic Cars workshop at our Suffolk HQ is this 1986 Ford Capri Laser. This car is currently undergoing its

The 1986 Ford Capri has been in the Bridge Classic Cars restoration workshop to have its new intake manifold and carburettor fitted to help the classic Ford run easier.

The restoration team have been working on getting the old manifold and carburettor onto the car and checking to make sure everything else looked ok once it had been removed. The issue with running, our technician Jon had narrowed it down to an issue with the carburettor that was fitted.

Because of this and the experience of our technicians, it was decided to upgrade the carburettor to a twin-choke Weber unit. This involved having to change out the intake manifold to work with the new carburettor set-up. Along with that, Jon made the new throttle linkage and set it up to have a better throttle response and be more adjustable.

With everything fitted back onto the car, it could begin testing. As the car sat idling, Jon could adjust the carburettor to get the car running smoothly and then out on road test, the Capri ran like an absolute dream.

Behind the Scenes – Live Draw of the 1986 Ford Capri

But, to change things up we decided to start it off a little bit differently. Those following along with Bridge Classic Cars Competitions will know that we also have just released our newest competition, a 2021 FB Mondial 300.

So, we had our friend and local motorcycle vlogger Karina (AKA Bike Like a Mum) ride it into our new building. This bike can be won along with £1000 to go towards either getting your license or new riding gear! You can enter the competition now just by clicking this link.

After Craig had a chat with Karina about her motorcycling story and go through some of the details on the bike, it was time to have a look round some of the other classics in our new Competitions building.

The 1966 Jaguar MkII and 1970 Morris Minor are scheduled to be won next Thursday with tickets still available on both. Along with that was an update on our 1989 TVR S2 competition in aid of the Ukraine Humanitarian Appeal which as of last night went over the £25,000 mark with amazing support coming from all corners of not only the automotive media and industry but also from enthusiasts alike.

Then it was time for the main event, to find out who the lucky new owner of the 1986 Ford Capri Laser was. As with all of our competitions, once the ticket entries close at 630PM the entry lists are published ahead of the live stream at 7PM. Using the Google Random Number generator, Craig did some test runs to make sure that everything was working just as it should.

With that, Criag put in the parameters for the number generator and then with the click of a button and a whir of numbers, the future of the Capri was decided. 1384.

That was the ticket number selected by the random number generator. Cross referencing the pre-published entry list it was found to belong with Matthew Mitchell. The lucky new owner of the 1986 Ford Capri Laser.

Behind The Scenes – Photoshoot with the 1986 Ford Capri

With the 1986 Ford Capri being completely checked over, inspected and worked on by the Bridge Classic Cars restoration workshop, it’s time to do this iconic classic Fords photoshoot.

With a clean bill of health by the workshop, Freddie and Hayley took the legendary sports car up to our filming location to shoot this car’s photos and videos because it is now a competition car! Yes, you could win this very car.

The light was near enough perfect for the shoot. The deep, rich black bodywork contrasting against the green background of the location. The 1.6-litre based 4 cylinder was bustling with life, wanting to stretch its legs at less than a moment’s notice. In the winter sun, it was idyllic. The long, flowing bonnet which greets the driver, the short stubby back and the signature Ford steering wheel talking away to the driver about the road which rushes past the low slung GT car.

This Capri benefits from some engine work done to it by its previous owners in which oversized pistons and a new cam profile mean that this Capri really does pick up and go.

You can check it out and enter now over on the Bridge Classic Cars Competitions website! Click the link below.

Stripped Back – Stripping the Carburettor of the 1986 Ford Capri

The restoration technicians at Bridge Classic Cars have stripped down the carburettor of the 1986 Ford Capri to get the classic Ford running just right.

Our technician Jon completely dismantled the aftermarket carburettor on the Capri due to the car running slightly off. He carefully and methodically cleaned out every port and duct on the carburettor to remove any form of sediment or dirt which may have built up over time inside the part.

With the carburettor taken apart, Jon could inspect all the necessary pieces before putting it back together with a clean bill of health and get it back onto the car. Once back on the car, Jon had to perform a small wiring repair before setting the carburettor up to get the Capri running perfectly.

The team in the Bridge Classic Cars workshop have been working on the 1986 Ford Capri to get everything working exactly as it should.

First, our technician Jon continued to work on the wiring under the dash of the classic Ford. He found a few repairs to the original wiring which were causing the original radio to not work correctly. So, with the repairs done to the harness and cleaning up unneeded wires, the original radio was now working just right.

Next up, he fitted the freshly repainted and refurbished engine bay pieces into the car. Several shrouds, the rocker cover and pipes were painted by our in-house paint shop for the Capri to give the engine bay a new fresh and clean look.

Finally, work could begin under the Capri. With the car up in the air, Jon had access to the suspension and brakes. First up was replacing the anti-roll bar bushes. These had perished over time and were allowing too much flex, so a new set of replacements were ordered and installed underneath. Whilst in the air, Jon could begin looking into an issue with the rear brakes.

Our other technicians on the car’s initial inspection noted a slight brake bind on the rear. So, Jon looked into the issue and found the rear drums were in need of a rebuild. Along with that, he replaced the hardline that runs across the rear axle to the new wheel cylinders. Then, after bleeding the brakes he reported that all was now OK and no more brake bind.

Now, it’s time to move on to getting the 1.6 litre 4-cylinder running properly.

Our recent arrival, the 1986 Ford Capri, has been inspected by the workshop who noted the sunroof on the classic Ford wasn’t working correctly. So, the whole mechanism was removed to be completely assessed by the team.

They found that one of the arms which control the tilt of the sunroof had broken, causing it to not load in and out of the roof correctly. After days of searching for this piece everywhere online, our fabrication team have expertly made a new piece to go back on the car.

With this installed back on the mechanism and the sunroof back in the car, it has been tested by the workshop and works correctly every single time.

The 1986 Ford Carpi Laser in the Bridge Classic Cars workshop has got some pretty serious cracks in the original dashboard. Our in-house trim shop has filled these but our trimmer Brian decided to go one step further.

Brian used the original dash pad as a template to make a new black vinyl cover for the top of the dash in the 1980s icon. He hand-cut and hand-stitched the edges to give the best finish to the piece and fit the overall finish of the interior of the Capri.

Once in the car, it went well with the rest of the dash and helped to cover the cracks in the dash.

The workshop technicians at Bridge Classic Cars have been working alongside our trim team to remove some of the parts and pieces from the 1986 Ford Capri to be refurbished.

The team began by working on removing the sunroof out of the classic Ford sports car. The technicians had noted that the mechanism seemed to bind and not lay into the roof evenly or flat. Once removed and inspected, it was found that one of the arms which controls the tilt of the sunroof was broken and because of the piece not going into the roof straight, was scratching the piece. This has all been removed to be refurbished along with several pieces from the engine bay.

After this, our technicians turned their attention to the radio and wiring in the Capri. The technicians noted some issues with both the radio and the wiring so after cleaning up some of the previous changes done to the car, everything worked perfectly.

The recently arrived 1986 Ford Capri Laser had had several body panels and trims removed from the car to be worked on by the Bridge Classic Cars teams.

The rear decklid, sunroof and under-bonnet pieces were all in need of refinishing. The paint and body team began by inspecting and preparing each of the panels separately for the classic Ford. The exterior pieces have faded and been damaged over time and needed to be stripped back and repainted to get the best finish possible to match the rest of the car.

The pieces from under the bonnet including the valve cover and manifold guard, have been finished in high-gloss black which has been done to match the rest of the engine bay.

The dash pad on the 1986 Ford Capri Laser currently in the Bridge Classic Cars workshop at our Suffolk HQ is starting to show some cracks and splits, but our in-house trim team know what to do.

These types of cracks in classic Ford dashes are relatively common but thanks to the material they’re made from they can be filled and if not completely removed, very much lessened. This is the approach that our workshop and trim team have taken with the dash pad on our 1986 Ford Capri Laser.

Even just with some simple filler work, it already looks far better.

The latest arrival into the Bridge Classic Cars workshop at our Suffolk HQ is this 1986 Ford Capri Laser.

This car is currently undergoing its assessment by the various in-house teams to get this iconic classic Ford into the best shape possible.

Keep a lookout here on the Bridge Classic Cars news page for more updates on the 1986 Ford Capri.