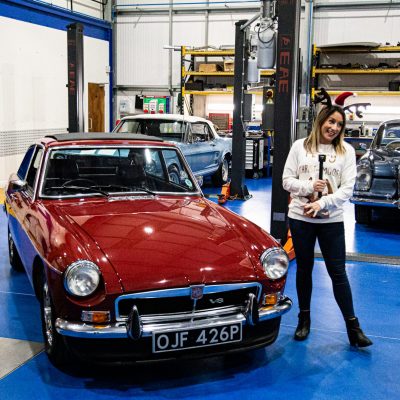 It wasn’t precisely the night before Christmas but it was near enough. With the workshop tidied away and set up for the exciting new year

It wasn’t precisely the night before Christmas but it was near enough. With the workshop tidied away and set up for the exciting new year ahead of us at Bridge Classic Cars, it was time to do the final live draw of the year. It was the turn of our 1975 MGB GT V8 to find its new home and it was time for a very special announcement.

After the normal formalities, it was time to fill our amazing audience in with some news. Our incredible presenter Charlotte, was leaving the role at Bridge Classic Cars Competitions. Charlotte, who has been such an amazing presence since the very beginning of the journey has handed over the reins to our newest presenter Hayley. Hayley is a true petrolhead with a wealth of knowledge and passion for anything vintage. So, with wishing Charlotte the best of luck with everything moving forward our followers were introduced to Hayley who will handle proceedings from now on.

Then, Charlotte took you around the stunning 1975 MGB GT V8. Finished in deep red with a black interior, this 1970s British sports car was going to find its new owner that night after an amazing response by our followers. After the walkaround, it was time to fire up the laptop and the random number generator. Along with the MGB was the chance to win a very special, limited edition REC Mustang watch. First, we had to find the new owner of the watch.

As Charlotte put in the highest and lowest numbers into the random number generator, the comments on our live stream began to wash over words of encouragement and good fortune to everyone. Then, in the flash of an eye, it was number 28 who would own the REC Mustang watch. That number belonged to Russell who had Christmas come early for him with his new special edition watch.

Finally, it was time for the main event. The draw of the MGB GT V8. As Charlotte readjusted the criteria on the number generator, the anticipation rose. Then, with the click of a button, the number 2441 appeared. That particular ticket had been bought by Roger who was now the very lucky owner of this fabulous icon of British motoring.