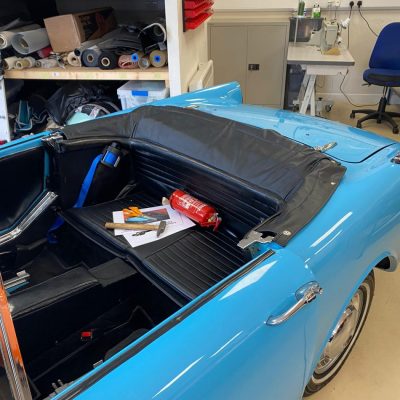 Safely Stowed – Fitting the Tonneau Cover on the 1966 Sunbeam Alpine 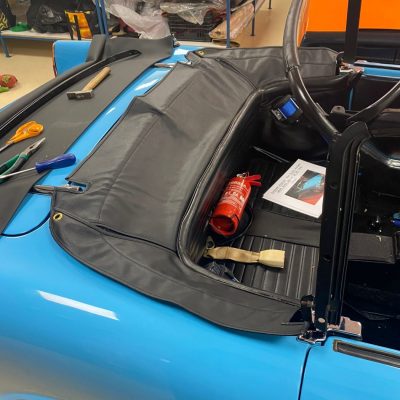 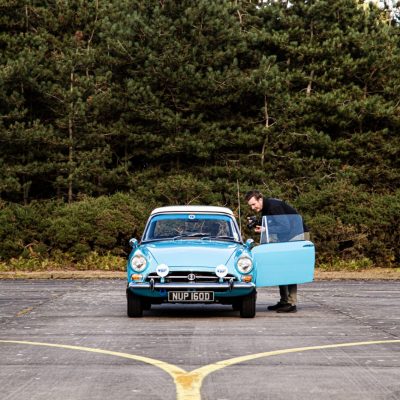 The clouds grew ominous in the late September sky. Rain threatened to fall at any moment on the shoot. The car had only been in 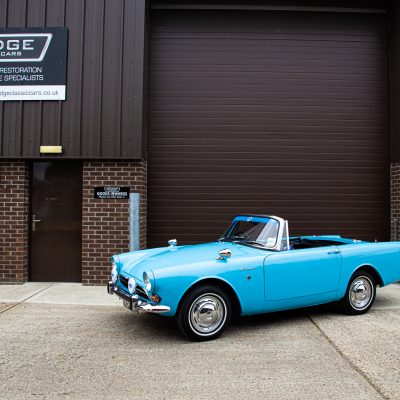 Hopefully, you will have all seen the news by now but if not, Bridge Classic Cars have got a fantastic 1966 Sunbeam Alpine in with

Safely Stowed – Fitting the Tonneau Cover on the 1966 Sunbeam Alpine

Our 1966 Sunbeam Alpine is freshly back from its time at the 78th Goodwood Members Meeting last weekend and it’s now time to have its tonneau cover fitted.

The Bridge Classic Cars in-house trim experts worked hard to get the new cover fitted and sitting just right on the back of this bright blue ’60s sportscar. Brian worked on getting the hardware fitted into the body of the car in just the right place to tightly pull the black cover in each way to make sure it flowed and sat well on the car.

Our in-house trim team can work wonders with just about any material they are given for a job. This, is a perfect example of the time, care and dedication given to a job by Brian, Kath and Lydia.

On Thursday (October 21st) the car will be part of a live draw over on our Facebook page where we will find out who the next lucky owner of this wonderful little sports car will be.

Tickets are still available! Just click the link below to head over to the Bridge Classic Cars Competitions website.

Enter here for the 1966 Sunbeam Alpine

What do you do when you have the roof down on your 1960s sports car and all of the cubby hole it fits into is on display? You have a cover made. Thankfully, our in-house trim shop was on hand to get the Sunbeam sorted.

You may know by now but this is our next Bridge Classic Cars Competitions car. It’s a 1966 Sunbeam Alpine just like the one Sean Connery drove in the James Bond film, Dr No.

The cover was made by our trim expert Brian, who also headed up the installation with the help of our other trimmer Lydia. The cover is there to give a finishing touch to the cars convertible hood stowaway when the roof is down. Each piece was carefully offered up to the car to ensure the best fit and finish for this amazing classic.

All of this is in preparation for the install of the new convertible hood which we will have an update on very soon!

The clouds grew ominous in the late September sky. Rain threatened to fall at any moment on the shoot. The car had only been in our possession a matter of minutes before it was whisked off the back of our enclosed Transporter and off to the shoot location. There was no time to spare.

The timeframe was tight. Shoot and edit the photos and videos for the latest Bridge Classic Cars Competitions car before the release of the latest James Bond 007 film, No Time to Die. Why? Because the Sunbeam Alpine was the first bond car. It appeared in Dr No with Sean Connery behind the wheel as the worlds most famous secret agent.

This particular Alpine had been dry stored for over 20 years before its previous owner had it completely rebuilt. A folder containing photographs of the rebuild came with the car stripped all the way back to bare metal and then worked on from the ground up. This car has been lovingly used by its previous owner, who is a true classic car enthusiast, for several years whilst also ensuring it is kept in the best condition possible for an in-use classic. That also includes the engine…

Without hesitation, the 1725cc 4-cylinder fired into life. The previous owner spent countless hours and no expense was spared getting the engine to perform and run perfectly. This particular engine has less than 1000 miles on it since being completely rebuilt to better than new condition. Along with the engine, this Sunbeam Alpine is fitted with the much-needed overdrive gearbox. Making it more useable as a classic in today’s modern world for its next lucky owner.

All of this was evident as we pulled away from the hanger. It revved out beautifully towards the lowering sun on the horizon. For take after take, the Sunbeam delivered faultlessly over and over again with Charlotte at the helm. As the temperature dropped along with the light, the Sunbeam still kept going. Its near-perfect interior offering no warmth with the roof off but still the best seat in the house when it came to a late summer evening jaunt.

It buzzed up and down the track without so much as a hesitation or stumble. The brakes were faultless, as proved when a herd of deer emerged from the undergrowth during a run. Not a problem for the Alpine, it gracefully and quickly came to a dead-straight stop.

With the light waning from under the wooded horizon, it was time to head back to the hanger.

Hopefully, you will have all seen the news by now but if not, Bridge Classic Cars have got a fantastic 1966 Sunbeam Alpine in with us in our workshop. Yes, the same as Sean Connery drove in the James Bond film Dr No. This is going to be a competition car which one lucky winner will be drawn.

This honest and really rather lovely 60s sports car also has an incredibly rare hardtop! so no matter the weather it can be enjoyed by its future owner. At Bridge Classic Cars, our in-house teams will assess the car soon to come up with a plan to get the Sunbeam to a stage where it can be instantly used and enjoyed.

Keep checking the blog for more updates on this fantastic car.