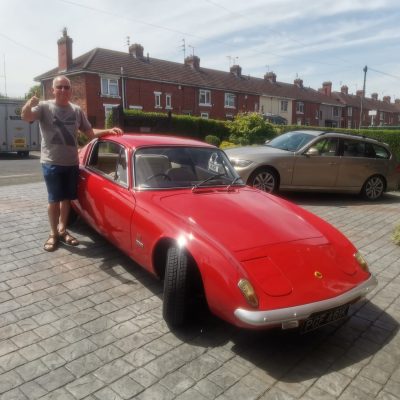 The winner of the Bridge Classic Cars 1972 Lotus Elan +2 took delivery of his classic sports car yesterday just in time for summer. Steven, 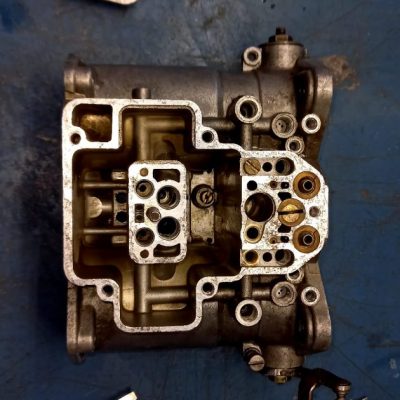 Whilst having its pre-delivery inspection, the 1972 Lotus Elan +2 developed a slight running issue. So, the Bridge Classic Cars workshop team have taken the 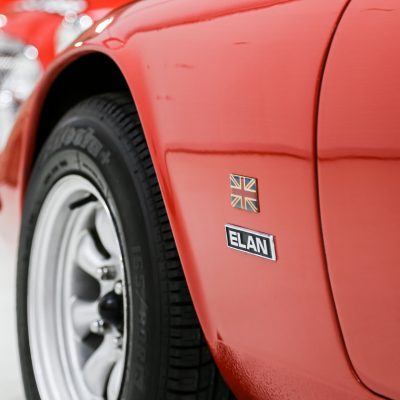 The Bridge Classic Cars team got together on a Friday night to find our latest winners for our double Lotus draw. The 1972 Lotus Elan 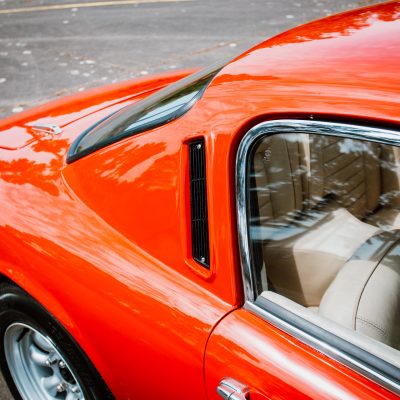 The Lotus Elan – An iconic piece of British design which has inspired and helped to form its competition since its introduction in 1962. Lotus 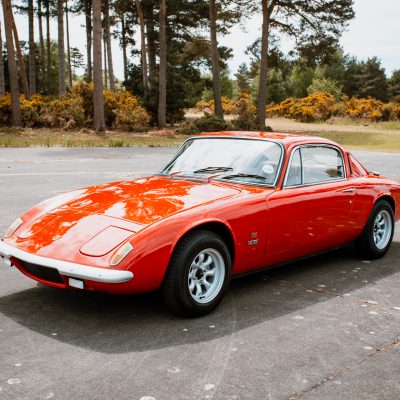 The saying attached to Lotus and it’s core DNA, Simplify, and then add lightness. That is what the Lotus Elan personifies. The low slung, lightweight 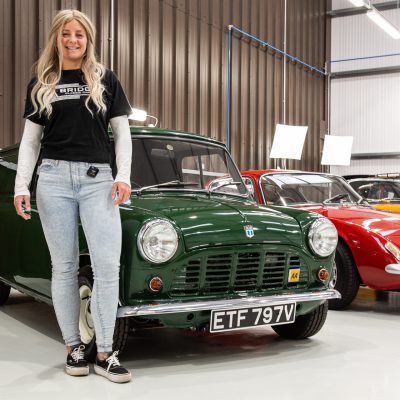 Behind the Scenes – Live Draw of the 1980 Supercharged Mini Van

Last night, Bridge Classic Cars went to find out who the lucky new owner of our 1980 Supercharged Mini Van was. At 7PM live on 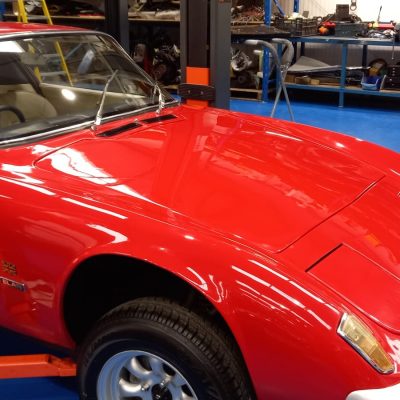 The 1972 Lotus Elan +2 which arrived from South Africa recently at the bridge Classic Cars workshop has had its full inspection completed and now, 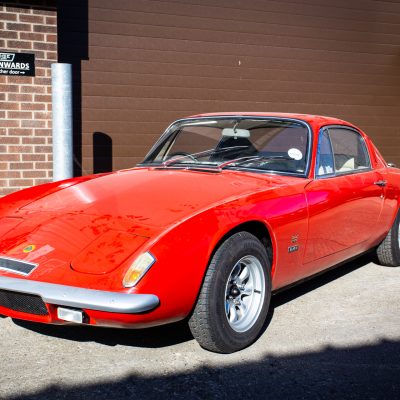 Another recent arrival from South Africa is this stunning 1972 Lotus Elan 2+2. This is now in the Bridge Classic Cars workshop at our Pettistree

The winner of the Bridge Classic Cars 1972 Lotus Elan +2 took delivery of his classic sports car yesterday just in time for summer.

Steven, who won the classic Lotus Elan, entered to win the car and his number was drawn! Part of the prize is also having the car delivered right to your driveway. And what a driveway this now is with the beautiful Elan sat there.

We wish Steven many happy miles with the car and all the best.

Whilst having its pre-delivery inspection, the 1972 Lotus Elan +2 developed a slight running issue. So, the Bridge Classic Cars workshop team have taken the carburettors off the car to look into the problem.

After removing the set of carbs from the classic Lotus our technician, Jon, could begin investigating what the issue was. In the carburettor bowls, he found that some sediment had built up and caused some small fuelling issues. So, the entire set-up was methodically stripped down to its base components before each individual piece was cleaned, inspected and tested before being put back together and refit to the car.

After this, the car was run up and then road tested, coming back with an all-clear from the workshop team ahead of its new life with its new owner.

The Bridge Classic Cars team got together on a Friday night to find our latest winners for our double Lotus draw.

The 1972 Lotus Elan +2 had been a firm favourite with the team here.

The 10th of June, the scheduled draw date, began with a quick walkaround of all of the beautiful machinery in the new competitions building. Walking past previous winners waiting for their delivery to new homes and some upcoming dream classics that we caretaker until their new owners are decided.

With our audience watching along live of our Facebook page, it was time to get down to business. Everyone waited with bated breath to find out if the wheel of fortune would fall on them.

First to be drawn was the Lotus Emira Driving Experience donated by Lotus Cars in aid of various charities. This included a tour of the new production facility, Classic Team Lotus and driving tuition by F1 hero Martin Donnelly. Checking our pre-published Entry Lists, we saw the competition wasn’t sold out entirely but using the random number generator, it was time to find out who was getting this very special first drive experience.

The first try, was an empty number. So was the second try, and the third, fourth but on the 5th random number generator we found that number 426 had been allocated to Martyn Bulbrook.

Finally, it was time to decide the winner of the 1972 Lotus Elan +2. The team reset the number generator and comments of luck and hope flooded the live stream. As Hayley pushed the button and the numbers whirred past in a frenzy, the screen lit up with the number. 1944.

Ticket number 1944 had been bought by Steven Rowat. The new owner of the beautiful 1972 Lotus Elan +2.

The Lotus Elan – An iconic piece of British design which has inspired and helped to form its competition since its introduction in 1962.

Lotus is known for lightweight, nimble and beautifully handling sports cars which the Elan has come to personify. Beginning production in the early 1960s, the Elan became a favourite of enthusiasts and racers alike. Its single-minded approach to pure driving enjoyment is what has stood the test of time for generations of drivers.

The early cars were built at the old Cheshunt factory before the move to the birthplace of our 1972 Elan +2, the legendary Hethel. The base of operations for Lotus since 1966 where everything from the Elan to the brand new Emira and all-electric Evija hypercar is built.

The Elans were built deep in the Norfolk countryside in the earliest iteration of the Hethel facility. The cars, which were assembled in then modern workshops, were tested in and around Hethel to make sure they are up to the driving standards that were set for a Lotus, and that still remains true to this day. Each Lotus is taken out from final assembly to be driven around the in-house test track which also served as the test track of Formula 1 and GT racers all the way back to the 1960s.

But what makes the Elan so special and have a following which spans across the globe? With cars being recorded in over 30 different countries.

The fibreglass body sat atop a steel backbone which formed its chassis. This process, which began with the Elan, would be the order of business for the next 30 years in Lotus road car production. This simple but effective way of creating a driving platform, allowed its creators (including the legendary Colin Chapman) to work on developing what many have claimed to be the benchmark of sports car handling.

The Elan’s 4-wheel independent suspension was paired with a 4 wheel disc brake set up to keep the beautiful twin-cam engined sports car settled and confident. The steering on the Elan was so legendary in fact, it has been set as the standard against which some truly incredible machines have been measured. Light and talkative, the steering in the Elan is just what you would want in a small, fun British sports car.

Such a machine has to be experienced to be understood. The lightness of touch, the purpose of expression and the visceral feeling of being at one with a car.

And, you could still win it! Click here to enter the Bridge Classic Cars 1972 Lotus Elan +2 competition.

The saying attached to Lotus and it’s core DNA, Simplify, and then add lightness. That is what the Lotus Elan personifies.

The low slung, lightweight sports car looked incredible in the summer sun. Its bright red paintwork contrasted against the rich green of the pine trees that lined the south loop of our filming location. This is our 1972 Lotus Elan +2 and it’s the latest competition car from Bridge Classic Cars.

The legendary Lotus Twin Cam 4-cylinder provided the soundtrack for our days’ filming. The raspy billow found its way to every surface and bounced back for the world to enjoy. The nimble sports car is known for its characteristic handling and this example is no different. The small racing steering wheel feels directly connected to the front wheels which helps to perfectly place the slant nosed 70s sports car exactly where it is intended.

You can’t help but smile wildly while experiencing the Elan. It gives so much feedback to its driver that you truly become one with the machine, the intended purpose of all Lotus cars. The driver is at the centre of the world.

And now, Bridge Classic Cars wants you to experience this incredible machine and the theatre that surrounds it. It’s the latest competition car and it could be yours very soon.

Head over to the Bridge Classic Cars Competitions website and enter now for your chance to live and breathe this dream classic.

Behind the Scenes – Live Draw of the 1980 Supercharged Mini Van

Last night, Bridge Classic Cars went to find out who the lucky new owner of our 1980 Supercharged Mini Van was.

At 7PM live on our Facebook page, we welcomed our followers watching along to our competition build which houses all of our competition cars and a couple of our personal cars and finished restoration projects. To begin with, we began our live stream from the inside of our new 1993 Land Rover Defender 90.

Then, Hayley and Freddie took everyone around the various cars which are held inside the building at our Suffolk HQ. Including the beautiful Saffron Yellow 1973 Triumph TR6 and the 1972 Lotus Elan +2. Of course, we couldn’t miss out on the car everyone was there for, the 1980 Supercharged Mini Van.

After the look around, it was time to find out who the new owner of this tiny terror was. The competition had sold out the day before so the entry list, as with all of our entry lists, is pre-published on our website for all to see. With 4999 tickets, we fired up the Random Number Generator.

With the parameters set, with one click of a button the fate of the Mini was sealed.

Its new owner was Peter with ticket 4529.

The team will give the Mini its pre-delivery inspection and one final check over before it is delivered straight to Peter.

Check out the live draw below:

The 1972 Lotus Elan +2 which arrived from South Africa recently at the bridge Classic Cars workshop has had its full inspection completed and now, the work can begin on the classic sports car.

The technicians noted that the engine mounts had begun to deteriorate and were moving around too much for our liking. So, the team sourced a new set of replacements to be fitted to the car. Putting the car up on the lift and carefully undoing the old mounts, Jon was able to support the engine from underneath and move the car slightly up and down to free the old mounts.

With these out, he could install the new pieces between the engine and subframe and tighten them down correctly. But before then, Jon had to make some modifications to the mounts as it now made the engine sit around 5mm higher in the engine bay. So, Jon removed the mounts and elongated the holes towards the top of the opening in order to give some adjustability and drop the engine down away from the bonnet.

Along with this, he also adjusted the bonnet catches to line up perfectly and take some of the stress away from the piece and fitted a new bitumen sheet to the underside.

Another recent arrival from South Africa is this stunning 1972 Lotus Elan 2+2. This is now in the Bridge Classic Cars workshop at our Pettistree headquarters.

The car, as with all cars that arrive, will be inspected and assessed by the restoration teams who will compile their reports and come up with a plan if needed.