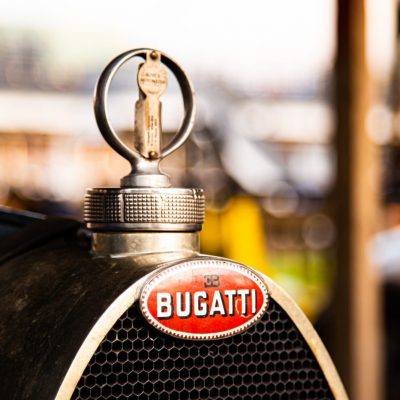 The mid to late 1930s were a heyday of Automotive design. Bespoke, futuristic interpretations of personal transport heavily influenced by art-nouveau and the art deco

The mid to late 1930s were a heyday of Automotive design. Bespoke, futuristic interpretations of personal transport heavily influenced by art-nouveau and the art deco school of design. Elegant answers to a simple question of moving people from one place to another. One of those at the forefront of this was a small French manufacturer by the name of Bugatti.

Bugatti had risen to prominence with its massively successful, lightweight Grand Prix cars along with super luxurious elegant limousines in the 1920s and early 1930s. The founder Ettore Bugatti came from a long line of artisans and craftsmen who plied their various styles and trades to all manner of things, but for Ettore it was cars. By the 1930s, Ettore had begun to step back from his role as the man in charge of Molsheim. His son, Jean would rise through the ranks as a talented designer, engineer and driver in his own right away from his father’s shadow. Culminating in what many believe to be the most beautiful series of Bugattis ever made. The 57SC Atlantics.

Using influences from both Art Deco and Art Nouveau, the Atlantics were a new style for a new type of owner. For this new car and new owners, only 4 57SC Atlantics would be built. Each of them was heavily personalised to their owner’s tastes and styles, their story begins with a special one-off. The 1935 Aerolithe Concept. A magnesium bodied show car which was set to usher in a new era of Bugatti’s by using advanced materials and techniques to blend the worlds of Grand Prix and Grand Tour.

The 4 Atlantics would use this technique to begin their construction, however, they were soon swapped for aluminium bodies made in the same style as the Aerolithe. With the identifiable riveted dorsal fin of the concept car displayed prominently on the Atlantics. Out of those 4 cars, three are accounted for and have gone on to be concours and show winners in their own rights around the world.

The fourth was given the name ”La Voiture Noire” or, The Black Car. It had originally been used by Bugatti as the show car to demonstrate to potential customers and the world the new age of Bugatti under Jean’s leadership and also happened to be Jean Bugatti’s personal car whilst doing so. La Voiture Noire’s early history is well documented.

The cars official Bugatti name is chassis 57453 and was gifted to Bugatti factory driver Robert Benoist for winning the 1937 24 hours of Le Mans and then was later given to fellow driver William Grover-Williams before his return to England just before the outbreak of World War 2. From the outset of the war until 1941, La Voiture Noire was kept as a test car for Bugatti after the death of its master Jean in 1939 whilst testing a racing prototype. But after 1938, no official records have ever been kept of the car. This is where the ghost story begins…

Rumours have circulated for the better part of 80 years about the journey La Voiture Noir would take into its own mystery. The last records speculate the chassis number was changed to 57454 and the whole car was to be dismantled for parts to be used on other projects and what was left was to be boxed up and stored. Other stories say the complete car had apparently made its way south to Bourdeaux, possibly in an attempt to conceal the car away from the factory and the furious pass of the German Army as it began planning its march into Europe on the eve of war. Some have also said it could have been sent as far away as the Middle East to be protected under the eyes of trusted Bugatti owners. But, no evidence or any form of lead has ever been found for the resting place of the car. Rumours of deserted railway cars, french barns, bricked up buildings, fake basements and even burying the car alive have circulated over the years throughout the enthusiasts. Ghost stories and treasure tales handed down from one generation of petrolhead to another. But alas, no news.

Until recently. A mysterious post on social media revealed a very strange looking body sitting in the back of a Connecticut, USA body shop claiming to be the missing Bugatti. However, leading Bugatti experts fervently rebuke that this is in any way La Voiture Noire. It is estimated that if Chassis 57453 (or 57454 if the history is correct) were to be rediscovered somehow, it could expect to fetch anywhere north of $100 million at auction because of its importance.

But, to most diehard enthusiasts, its story remains priceless.