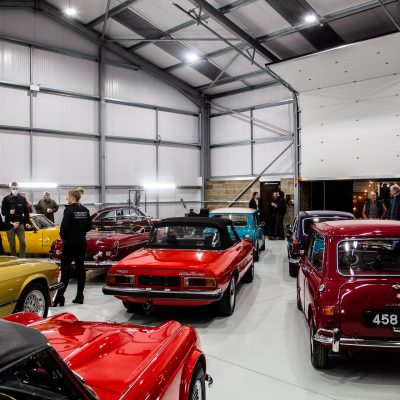 This time, it was the 1964 Triumph TR4 and 1976 Mercedes 350SL which would be finding their way to their new lucky owners.

Close friends, clients and previous winners were all invited to the event which took place in the new home of Bridge Classic Cars Competitions, the as-yet-unnamed extension. Being January, the evenings are cold but thanks to Carmello Coffee we all managed to keep warm and fed while everyone looked around some of our cars in both the extension and the workshop.

Then, as the clock struck 7 pm, it was time to go live to all our followers. Hayley and Craig, with Freddie behind the camera, took everyone on a tour around our current lineup and a few sneak peeks at what is coming in the future with Bridge Classic Cars Competitions. Hayley then had a chat with our friend Simon Benton, owner of the all-electric Mini which will soon be appearing on the Discovery Channel, about the background on the car and its connection to Bridge Classic Cars.

Next was the bit everyone was waiting for. Finding out who was about to get a phone call that would make their dreams come true.

First, was the draw of the 1976 Mercedes 350SL. As Hayley put the numbers into the random number generator, you could feel the air filled with excitement. Then, as the numbers whirred round in a flash, they stopped on number 3461. That, belong to Zhuman Zamiri.

Then we decided to find out who the new owner of the stunning 1964 Triumph TR4 would be. As Hayley put the new set of numbers into the number generators, we wished everyone luck. Then, with one click of a button. The future of the TR4 was sealed. Stuart Brown was now the proud new owner of the beautiful ’60s sports car with ticket 3338.