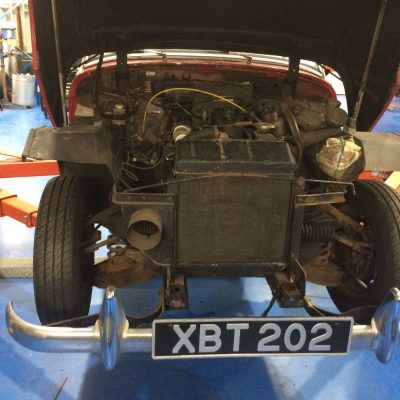 Moving Along – Working on the 1959 Austin Healey Frogeye Sprite

The 1959 Austin Healey Frogeye Sprite in the Bridge Classic Cars has been moving forward towards the goal of running and stopping perfectly. First on

Moving Along – Working on the 1959 Austin Healey Frogeye Sprite

The 1959 Austin Healey Frogeye Sprite in the Bridge Classic Cars has been moving forward towards the goal of running and stopping perfectly.

First on the list of jobs was for our technician, Dave, to look into the cooling system on the iconic classic sports car. Dave began by looking at the radiator, which on inspection had a broken mount for which he fabricated a new replacement for. With the radiator out, the workshop could then work on replacing the water pump for the car.

Dave found the old water pump wasn’t in the best of shapes so it’s good that we had been asked to replace it with a customer supplied unit. During this time, he took the opportunity to completely flush out the cooling system and clean up the outlets. With this, it was found the thermostat was packed almost solid. The battery on the car has also been replaced and the battery tray rust treated.

After this had been completed, Dave could begin his inspection of the suspension and brakes as part of the car’s pre-MOT check. He found the driver’s side track control arm was loose and the bolts which held it were so corroded they couldn’t be tightened accurately. So, he removed the old bolts, cleaned the threads in the arm and replaced it with new hardware from our stores. Whilst inspecting the braking system on the Frogeye, Dave discovered that the master cylinder had become corroded internally from sitting which in turn had caused the wheel cylinders (which were recently fitted) to seize. Replacements were going to be needed to get the brakes on the Frogeye working correctly.

With this and waiting for several parts, Dave could now move on to the next jobs on the list…