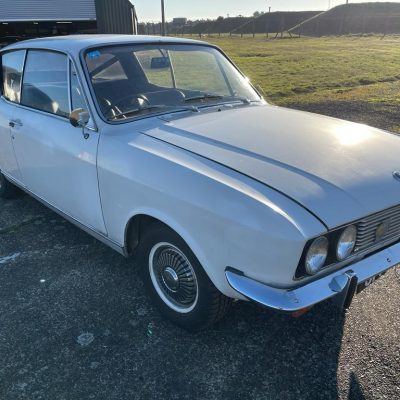 Bridge Classic Cars have acquired one of the most complete, original and low mileage Sunbeam Rapier’s that we have ever seen or known of. This

Bridge Classic Cars have acquired one of the most complete, original and low mileage Sunbeam Rapier’s that we have ever seen or known of. This 1969 Sunbeam Rapier is finished in white with a black interior and still holds many of its original trims, panels and parts.

The car was bought new by the previous owner’s aunt for her 80th birthday in 1969 as a gift to herself on such a milestone. She then proceeded to use the car for the next 13 years until it finally went into long term hibernation when the driver turned 93 years old. After the car had been docile for nearly 10 years, the family drug the Rapier out and got it running again in order for it to take it on a rally to France with a reported round trip of around 1200 miles achieved with no problems – An amazing story for such an amazing and rare car to see these days. And when you think the odometer has only just surpassed 27,000 miles in 52 years.

The car, as stated, is in very original condition. Only records and evidenced are small Bodywork repairs possibly done in period and minor mechanical changes either routine or completely necessary throughout the car’s driving life.

The car doesn’t appear to have any form of rust anywhere on the body (and especially the strut towers). The engine, however, is in an unknown condition but we are confident that with a small amount of effort and perhaps parts the glorious 1725cc 4-Cylinder would fire into life once more.

If you would be interested in owning this incredible piece of British sportscar history and a true survivor car. Please get in touch with the Bridge Classic Cars team by either calling us on 01473 742038 or Emailing Us at info@bridgeclassiccars.co.uk